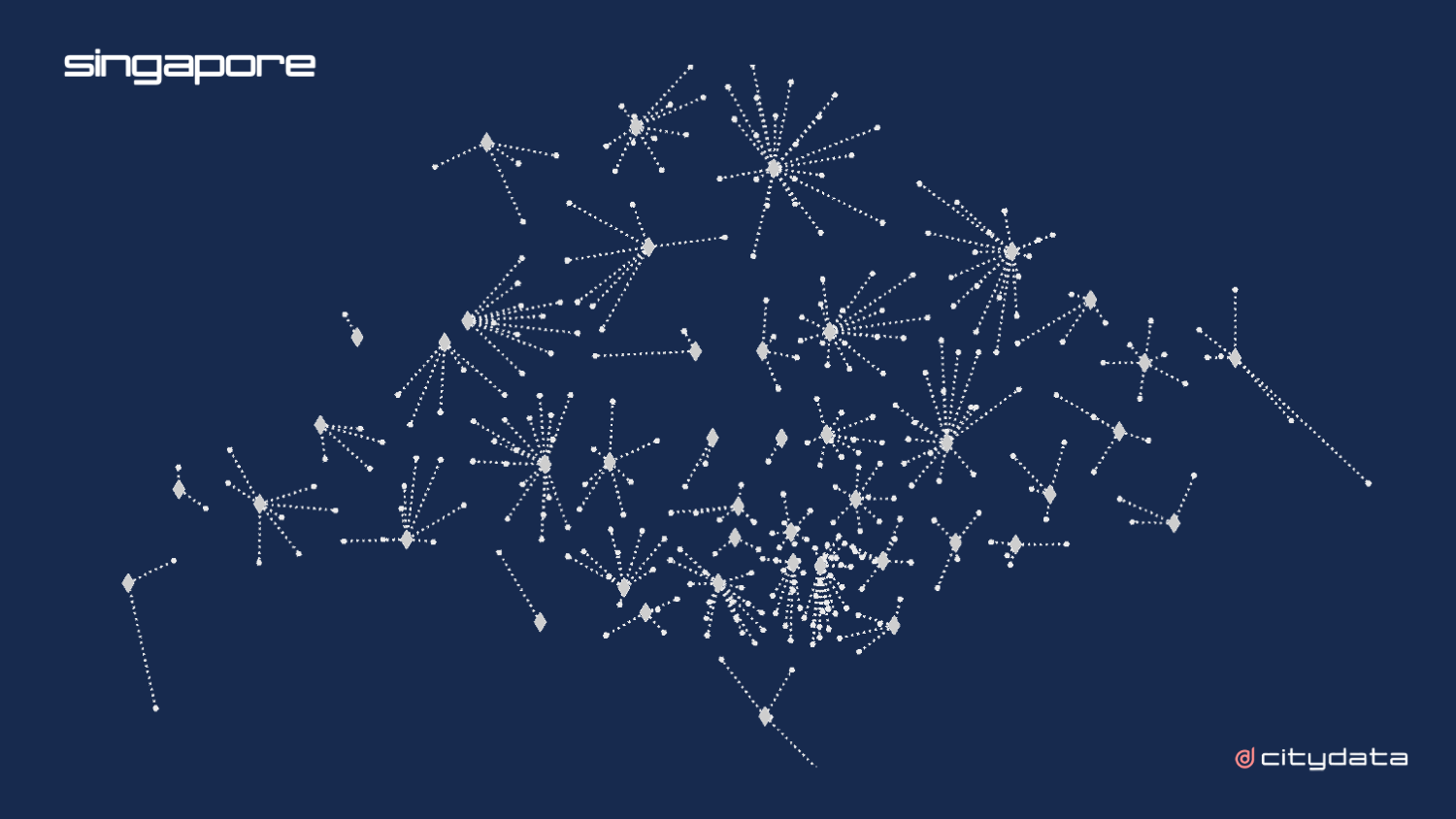 This blog post contains excerpts from the research paper titled "Segregation Across Neighborhoods in a Small City" by Shu En Lee, Jing Zhi Lim, and Lucas Shen from the Asia Competitiveness Institute, Lee Kuan Yew School of Public Policy, National University of Singapore, based on the mobility data and trip hop movement patterns provided by CITYDATA.ai

Sign up for our webinars to learn from our data scientists and geospatial experts. They will show you how geospatial intelligence can be used in the most cost-effective way to measure and analyze movement patterns.

Social segregation has profound impacts on socioeconomic outcomes. Using mobile GPS pings that were joined spatially to census records, our friends at the Asia Competitiveness Institute, Lee Kuan Yew School of Public Policy, National University of Singapore (NUS) were able to examine daily movement across geographically-refined neighborhoods across Singapore. The anonymized mobility data and trip hop movement patterns for this research were contributed by CITYDATA.ai as part of the UniverCity Council initiative. The research paper can be found here.

The main conclusion of this research initiative was that GPS-derived data can detect segregation by poverty, even with an imperfect proxy, and in the presence of targeted urban policies aimed at social integration. The findings bode well for the use of GPS data in general to measure social segregation.

In this study, the researchers used GPS (global positioning system) ping records obtained from CITYDATA.ai and tested whether real-time movement across neighborhoods in the city-state of Singapore, which are geographically refined, is correlated with census-derived poverty levels. The findings support the use of GPS-type data as an emerging tool to understand and study social interactions at a temporal frequency much higher than possible with traditional census-based measures. Detecting social segregation from GPS-derived movement patterns also suggests that there are limits to urban planning policies that specifically aim to socially integrate a diverse group of population.

Even in the presence of policies aimed at social integration, with an imperfect proxy for poverty, and after removing variation in movement patterns that originate from other factors such as spatial frictions and points of interest, the researchers found a persistent correlation between poverty and movement patterns. While this analysis is based on the city-state of Singapore, the researchers claim their method can be readily adapted to other metropolitan areas, and the efficacy of the GPS-derived data to detect segregation in a city that is meticulous with urban planning and social integration bodes well for the use of GPS data in general.

In the context of the city-state of Singapore with a history in policies that aim at social integration via public housing allocation along ethnic lines, this research indicates that :

Segregation cannot simply be socio-engineered away. Segregation can have profound consequences along both social and economic dimensions and create schisms in everyday social life. The availability of GPS data provides further understanding of human behavior. Contemporaneous research shows the use of GPS data to study how partisanship affects family ties, how policing spatially affects criminal behavior, how GPS can be used to predict poverty and wealth when census records are sparse, and how GPS data can be used to examine safe-distancing in the Covid-19 pandemic.

Economic and social outcomes are strongly shaped by who people know and the networks they have access to. Social segregation is therefore important in shaping the paths that individuals take. Past research for instance has found that social connectedness improves startup success and labor market opportunities, and segregation is correlated with greater violence and worsens socioeconomic markers such as schooling, employment, and marriage.

We are publishing the link to download the research paper by Shu En Lee, Jing Zhi Lim, and Lucas Shen from the Asia Competitiveness Institute, Lee Kuan Yew School of Public Policy, National University of Singapore.

Mobility Data +Ai for Cities and Metro Areas in Australia